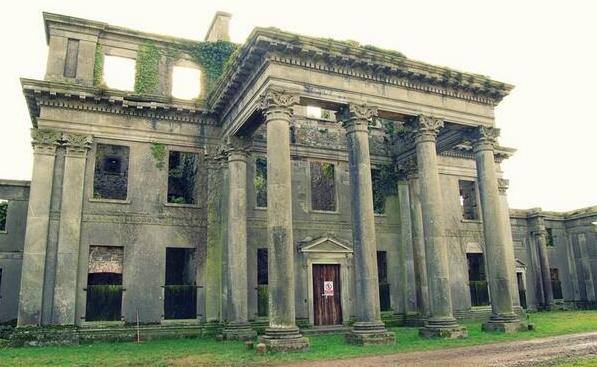 Castleboro House, Clonroche was one of at least five ‘big houses’ that were destroyed in Wexford during the Irish Civil War. This description of the attack is taken from The People newspaper (February, 1923)

‘Castleboro, the ancestral home of the Right Hon. Lord Carew was burned to the ground on Monday night, and all that remains now of the palatial mansion are smoke begrimed roofless walls and a heap of debris. The reason for the destruction of one of the finest residences in Leinster remains a mystery to all but those who were responsible for the destructive work which will only add more thousands to the bill that the Co. Wexford will have to foot when the time of reckoning comes. The work of destruction was perpetrated shortly after ten o’clock on Monday night..…’

‘Between nine and ten the farm steward, Mr. Robert Richardson was knocked up at his residence by armed men. On answering the knock he was compelled to hand over the keys of a store in which some barrels of paraffin oil were stored. These the armed men took possession of and rolled them from the farm yard to the main building and brought with them hay, which they also got in the farm yard. Then it would appear that they soaked the hay in the paraffin and scattering it through the main building set it alight with the result that in a short time the whole place was ablaze…’

‘Entrance to the house was gained through the French bay windows which would appear to have been broken by the butt end of rifles. The noise of the breaking of the glass was plainly audible in the farm yard and tongues of flames leaping up to the sky after a short space of time conveyed the first intimation of what the advent of the armed men breaking in on their peaceable surroundings meant while they were left powerless to attempt to save their master’s property… It was impossible to do anything to extinguish the conflagration which had taken a complete hold of the building and which appeared to have been fired in several places. The fire raged furiously for some hours and completely destroyed the fine building.’