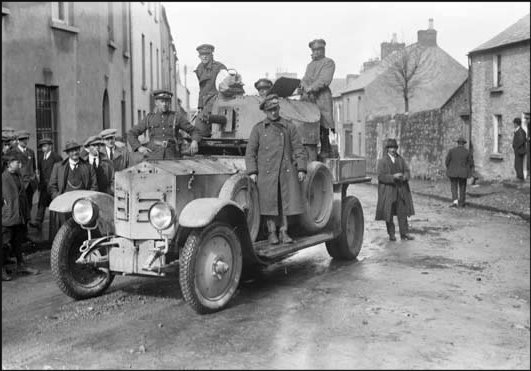 On the morning of Friday the 7th of July 1922, Ferns, Co. Wexford was firmly under the control of the anti-Treaty IRA. They had captured the village the previous Wednesday after a sustained firefight, which left one Free State soldier dead (Matthew Pender). However, their victory was to be short lived.

The anti-Treaty forces were using the village’s post office as a makeshift base, as the nearby RIC barracks had been burned down during the recent fighting.  As they were fortifying this building, a large convoy of Free State troops approached the village from the direction of Gorey. The men defending the post office appear to have been unaware of how close this convoy was and were taken by complete surprise when a Free State armoured car sped into the village.

The armoured car opened fire with its machine gun and four anti-Treaty/IRA soldiers, who had been loitering in front of the post office, fell to the ground wounded. The remainder of the men barricaded themselves inside the post office and prepared to fight. However, they were quickly surrounded by a very large and well equipped Free State force.  When one of the defenders, a man named Murphy, peered out the back door and was shot and seriously wounded, the officer in command of the anti-Treaty forces, Francis Carty, made a decision. They ‘would not fight on to the death as nothing was to be gained by doing so‘ and he ordered his men to stand down (in later life Carty would become editor of the Sunday Press newspaper).

The Free State forces subsequently took complete control of Ferns, capturing 31 anti-Treaty men in the process, along with their weapons, which included 21 rifles and 12 revolvers. According to Francis Carty, the Free Sate convoy which retook Ferns consisted ‘of several hundred men, with four or five armoured cars and one or two field guns‘. One of the armoured cars was named ‘The Custom House‘ and this vehicle is pictured above.