At the start of the Civil War, Enniscorthy was the only large town in Co. Wexford that contained a garrison of both Free State soldiers and anti-Treaty IRA volunteers (the remaining three towns were held by the anti-Treaty IRA alone). This led to much tension in the spring and early summer of 1922, as the erstwhile allies eyed each other suspiciously. The Free State soldiers were based in the old R.I.C. barracks in Abbey Square, while the anti-Treaty IRA were billeted in the town’s courthouse. From these two locations they attempted to govern Enniscorthy, sending out rival patrols to police the town. However, this uneasy truce was shattered on July the 2nd, 1922, when both sides attacked each other, in what would become an intense urban battle that would last for the best part of four days.

Preparation for this conflict began in earnest on Friday June the 30th, when the town’s Free State army garrison left the old R.I.C. barracks and took over Enniscorthy castle[i]. Ten soldiers[ii], under the command of Sean Gallagher, were posted to this building and they quickly started moving weapons and ammunition into the castle. Meanwhile the remainder of the Free State garrison, some 26 men in total[iii], began reinforcing the old R.I.C. barracks, a building which was already in essence a mini-fort, with its thick stone walls, gun-loops, steel doors and thick steel shutters on the windows.

This activity stirred the anti-Treaty IRA men into action and the following day they took over the Urban District Council offices in Market Square, The Portsmouth Arms Hotel in Templeshannon and St. Mary’s church[iv]. The latter building was chosen as it over-looked the castle and the IRA quickly set about fortifying the spire with sandbags. This lofty vantage point was then manned by a team of snipers, under the command of Thomas Meagher[v].  In a similar vein, the Free State army sent a group of men to occupy Lett’s Brewery, as it gave them a commanding view over the main anti-Treaty IRA base in the courthouse.

These military movements soon drew large crowds of onlookers and the local newspapers describe a carnival-like atmosphere in the town[vi].  However, the mood was to change drastically on Sunday evening when, at approximately 10 pm, shooting suddenly erupted. Heavy fire was exchanged between the Free State soldiers in the castle and the IRA snipers in St. Mary’s church spire. This fighting gradually spread through-out the town, with the R.I.C. barracks and the castle coming under fire from multiple locations. The Free State soldiers in Lett’s brewery were also attacked and, with threat of encirclement looming, they were forced to retreat towards Abbey Square.

On Monday morning a brief lull in the fighting occurred and this allowed many of the town’s inhabitants to escape[vii]. Long lines of people were seen leaving Enniscorthy and areas such as Friary Hill, Castle Street, Castle Hill, Slaney Place, John Street and Church Street were completely evacuated[viii].

However, this pause in fighting was short lived and the shooting soon resumed and this time with even greater intensity. The IRA positioned snipers all around the town, while the Free State troops returned fire with machine guns and rifles. As the fighting progressed the IRA detonated a large mine in front of the castle. Although this failed to cause any significant damage to the medieval fort, it did blow out the windows of many nearby  houses and shops[ix]

Meanwhile, the Free State soldiers began throwing grenades from the castle roof and these exploded in the surrounding streets. Indeed, a group of IRA soldiers fighting from a house Slaney Street had a lucky escape, when the roof of the building collapsed due to explosion caused by one of these grenades[x]. Unsurprisingly, the townspeople were greatly affected by the fighting and those who couldn’t escape to countryside, remained hidden in doors. Those who did venture outside took their lives in their hands and on Monday a civilian by the name of Edward Dillon was shot and injured as he walked near Templeshannon[xi].

By Tuesday the IRA’s numbers had swelled to several hundred men and they had largely encircled the two Free State garrisons. They now occupied buildings along Templeshannon Quay, Slaney Street, Castle Street and Abbey Square as well as firing positions on the Turret Rocks and in the fields in front of the Mercy Convent[xii].  From these locations they rained down a hail of gunfire on the Free State garrisons in the castle and the R.I.C. barracks. 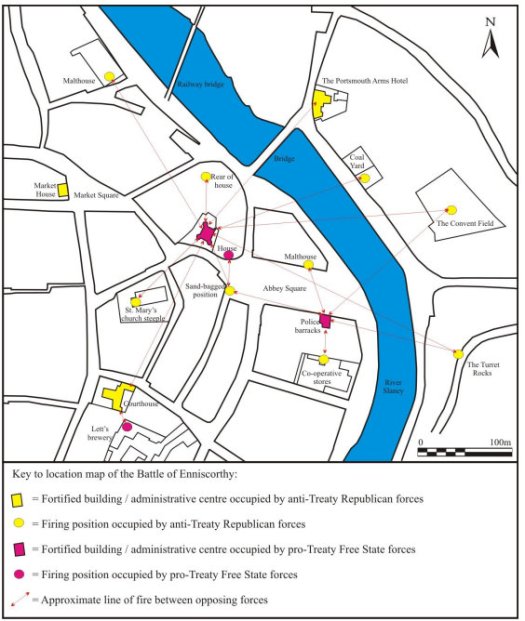 The IRA were further reinforced early on Wednesday morning, when over 100 men arrived in the town. These included veterans of the recent fighting in the Four Courts, Dublin as well as a contingent of fighters from Tipperary. Led by Ernest O’Malley and future Taoiseach, Seán Lemass, these new arrivals invigorated the anti-Treaty IRA attacks and the Free State positions came under even heavier fire.

Later on Wednesday morning the first fatalities of the fighting occurred when a small group of anti-Treaty IRA men attacked the town’s main post office, which they believed (wrongly) was held by Free State soldiers[xiii]. They approached the building from the rear, along Friary Lane, hoping to surprise the defenders. They then smashed in the back windows and threw grenades inside hoping to clear the building. These loud explosions aroused the attention of a Free State sniper, who was located across the street in Myles Kehoe’s pub (No. 7 Castle Hill). This sniper opened fire with deadly accuracy, hitting two of the anti-Treaty IRA volunteers, Maurice Spillane and Patrick O’Brien. The remaindered of the IRA attacking party dived for cover, while one of the men, Ernie O’Malley, returned fire with his revolver[xiv].

Maurice Spillane died on the spot, while his comrade, Patrick O’Brien, succumbed to his wounds a few days later. Both men were veteran republicans and had been heavily involved in the War of Independence. Spillane was from Hospital Lane, Enniscorthy and prior to the Civil War had been a member of the North Wexford Flying Column. Patrick O’Brien, meanwhile, was a native of Dublin who had fought in the Easter Rising. A soldier of some note, he had commanded the Four Courts garrison during the recent fighting in Dublin.

As Wednesday progressed the position of Free State garrisons became increasingly precarious. The R.I.C barracks was in a terrible state; the southern side had partially collapsed and the building was riddled with hundreds of bullet holes[xv]. The men inside had suffered a number of casualties and were running low on both water and food. Completely surrounded, they felt they had no other choice but to surrender and just after 4pm a white flag was flown from the barracks[xvi]. Their comrades in the castle followed shortly afterwards and finally, after four days of fierce fighting, the ‘Battle of Enniscorthy’ came to a close.

The anti-Treaty IRA were magnanimous in victory and let the Free State soldiers leave the town unmolested and their officers were allowed to keep their revolvers[xvii]. The remainder of the Free State soldier’s weapons were confiscated and this amounted to quite an arsenal. In total 28 rifles, 10 shotguns, 1 lewis machine-gun, 36 hand-grenades and circa 2000 rounds of ammunition were captured by the anti-Treaty IRA[xviii].

This IRA victory was short-lived though, as just two days later, they were forced to withdraw when a large Free State army column advanced on Enniscorthy[xix]. They left behind a battle-scarred town; the courthouse was in flames and the R.I.C. barracks had been partially destroyed using explosives[xx]. Another 40 or so houses had been damaged by bullets and bombs, including Enniscorthy castle and St. Mary’s church[xxi]. The human cost was also high, two men had died and at least 12 others had been wounded, some very seriously.  Although some normality returned to the town on Friday the 7th of July, with the arrival of several hundred Free State troops, Enniscorthy continued to see gun and bomb attacks until May 1923, when the anti-Treaty IRA finally laid down their arms and the Civil War came to a close.

[xviii] A republican bulletin published in the Southern Star newspaper,15-07-1922

Feel free to contact us. Our project email address is: colmwexford@hotmail.com