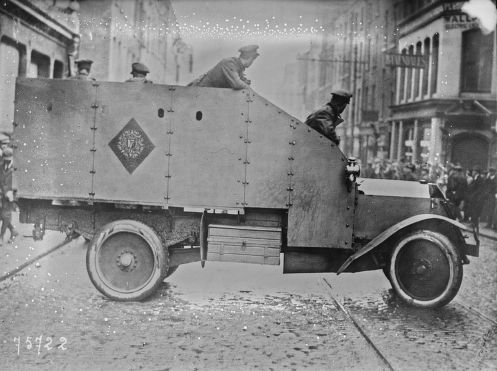 On the 22nd of October 1922 a Free State armoured vehicle travelling from Wexford town to Ferrycarrig was ambushed by Anti-Treaty gunmen. The attack left four soldiers dead and two seriously wounded.

The armoured car’s destination, Ferrycarrig bridge, was an essential transport route, especially since the river crossing in Wexford town had been blown up the previous July. It was guarded by a small Free State garrison who were based in McDonald’s public house (later the Oak Tavern bar) and these men were entrusted with keeping the bridge open to traffic. This relatively isolated garrison soon drew the attention of the anti-Treaty IRA, who attacked the out-post on a number of occasions, resulting in the death of a least one Free State soldier. Due to these frequent assaults it was felt necessary to assist the garrison at Ferrycarrig by providing regular military escorts from Wexford town.

However, these patrols left Wexford at the same time every night, which allowed the anti-Treaty IRA to predict their movements and to plan an ambush.  On the night of October 22nd a five man IRA team, led by Bob Lambert, took up position on a railway bridge which traversed the main Ferrycarrig to Wexford road.

As the ambushers lay in wait, a party of eight Free State soldiers set out from Wexford in a Lancia armoured car. This vehicle was well protected with steel plates on the sides, rear and front, but the roof was uncovered. As it passed beneath Ferrycarrig railway bridge the anti-Treaty IRA men opened fire with ‘double barreled guns’ (shotguns) and hurled a ‘mills bomb’ (a type of grenade) into the armoured car through the unprotected roof. This exploded inside the vehicle causing carnage. Four of the Free Sate soldiers were killed, while two more were badly injured. Somehow the driver managed to continue on his journey before crashing into a wall close to Ferrycarrig bridge. Meanwhile the IRA men made good their escape.